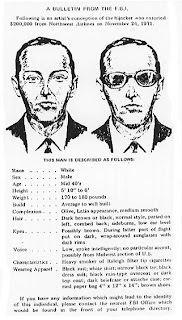 The solution to one of the greatest mysteries of all time still eludes America’s Federal Bureau of Investigation. On the November 24, 1971, a man in his mid forties and giving the name Dan Cooper (he is also known as DB Cooper due to a ‘press miscommunication’) hijacked a Boeing 727 aircraft and demanded $200,000 in ransom and two parachutes. His claim of having a bomb in his briefcase was verified by an air stewardess.

Cooper was given the ransom money at the Seattle-Tacoma Airport. He allowed passengers and some members of the flight crew to leave before ordering the plane to be flown to Mexico.

Soon after the plane took off, Cooper then opened the rear airstairs and parachuted into the pitch black, rain-lashed night. A five month manhunt – said to the most extensive and expensive of its kind – was immediately launched. Despite $5,880 of the ransom being discovered by a boy in 1980, no other trace of the hijacker was ever found.

In 2007, the F.B.I. reopened the case, saying that it does not believe Cooper survived the jump, but expressed an interest in ascertaining his identity, saying: “Would we still like to get our man? Absolutely.”

Despite there being hundreds of leads since 1971 (including many deathbed confessions), Cooper’s identity remains a mystery and the world’s only unsolved skyjacking case.
Posted by Anonymous at 1:30 AM