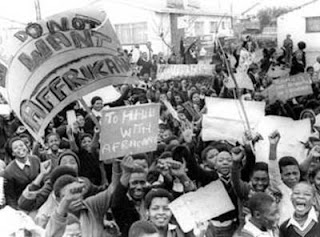 The Soweto uprising began on June 16, 1976 in Soweto, South Africa because of the government of the time. During 1976, the government was run by the National Party, which was known for its racial segregation, also known as apartheid. South Africans who weren’t given equal living opportunities as Caucasians. Blacks had to pay for schools to stay open through taxes, even though many of them were poor and weren’t able to contribute the necessary amount of money. Those who were unhappy with the governments rule clashed with authorities, which then lead to about 600 deaths.

The uprising took about 10 years to really gain ground, but once it did, there was no stopping the young, high-school aged men and women from standing up for their rights. In 1953, a law was passed that created the The Bantu Education Act, which was to establish a learning curriculum that was designated for blacks. Dr. Hendrik Verwoerd was the pushing force behind the act as he believed that blacks needed to be taught that they would never be equal to Europeans. While they were able to learn some things, those students who did attend the various schools set up for them only learned skilled that would require labor. None of them were taught to do things that would put them above whites. As time went on, more restrictions were put on African American education. Blacks, in 1972, were told that they would only be taught in Afrikaans, which was the white man’s language. This infuriated students, who were already angry about the lack of education, the lack of money, and the lack of rights. Teachers refused to teach in Afrikaans and many staged in-class boycotts. Once this was realized, police were sent in, and various other boycotts, which eventually turned into a riot, took place.

By the end of it all, 600 citizens were dead. Many of them weren’t older than 18 as most of them were still in high school. After citizens began throwing bottles, stones, and setting buildings on fire, the police force began to use violence to settle the crowd, which eventually killed many. Many of those who were still alive after this tragedy left South Africa. Today, June 16 is now celebrated as Youth Day. The day was made to remember and honor all of the young men and women who died during the uprising to have their voice heard.
Posted by Anonymous at 1:30 AM