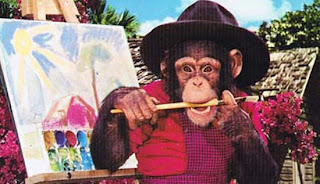 At some point we’ve probably all looked at a piece of modern art and thought: “anybody could have painted that.” In 1964, Swedish journalist Dacke Axelsson actually put this claim to the test. In what has come to be a famous hoax, he took a series of paintings by a chimpanzee named Peter, a ward of the local zoo, and began circulating them around Sweden as the work of an unknown French artist he called Pierre Bressau. In order to put art critics to the test, Axelsson chose a few of Peter’s best paintings and set up an exhibition in Gothenburg. Sure enough, the mysterious Mr. Bressau was hailed by some as a bold new talent. One writer even claimed that the work showed all the signs of “an artist who performs with the delicacy of a ballet dancer.” Surprisingly, once the paintings were revealed as the work of a primate, none of the art critics retracted their praise. In fact, Rolf Anderberg, the critic who’d been Bressau’s biggest champion, insisted that Peter’s work was still the best thing at the exhibition. Of course, not all the critics fell for Axelsson’s ruse. One writer reportedly remarked that “only an ape” could be responsible for the paintings
Posted by Anonymous at 1:30 AM