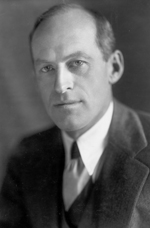 Millard Tydings was a United States Democratic Senator from Maryland from 1927 to 1951. In 1950, Republican Senator Joseph McCarthy claimed that there was Communist penetration into the federal government and military. Tydings responded and investigated by forming and overseeing the Tyding hearings. After the hearings he published a report denouncing McCarthy and his Communist claims as a hoax. When Tydings was running for re-election, McCarthy’s staff distributed a picture of Tydings with Earl Browder who was the former leader of the American Communist Party. In reality Tydings had never met Browder before and the picture was actually a composite of a 1938 photo of Tydings (right) and a 1940 photo of Browder (left). The image is believed to have contributed to Tydings’ defeat in his bid for reelection.

Interesting Fact: Millard Tydings is the grandfather of actress Alexandra Tydings who is best known for her role as the Greek goddess Aphrodite on the popular TV series Hercules and on its spin-off Xena.
Posted by Anonymous at 1:30 AM