The Central Station was finished during the advent of the automobile - 1913. The Beaux-Arts style of the classical building recalls a time when Detroit possessed the resources and momentum to rightfully emulate Parisian architecture. Its old school ambition is not lost on current Detroit residents but its function certainly is. It is a doorway into a forgotten world and a poster-boy for urban decay. The graffiti and dilapidation tells the story not just of Detroit's acrimonious decline but also the abandonment of rail travel in the United States. At its peak during the 1940's, 200 trains left this station daily. Today, none. While rail travel is receiving some political buzz in Washington, the fate of this gorgeous structure is uncertain. Many have flirted with re-purposing the old building, from the Detroit Police to casino developers, but for the moment it stands quietly on the outskirts of the modern world like an old ornate wrench that fits no bolt. It has been abandoned since 1988. 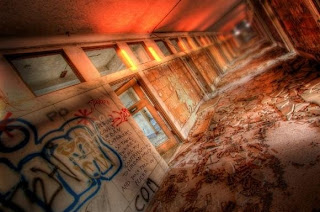