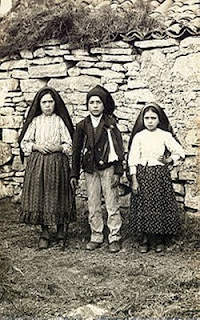 On June 26, 2000, the well known third secret of Fatima was revealed by Cardinal Ratzinger (now Pope Benedict XVI), accompanied by a theological commentary. The secret referred to a Pope being killed and a city in ruins. What most people don’t know is that during the many years in which the secret was hidden from all but a few eyes, portions of it (and hints at what it contained) were leaked, by people who had either read the secret or spoken to Sister Lucia (the seer who penned it – pictured above). The leaked information did not correspond with the secret released by the Vatican. Consequently a large number of people believe that the Vatican document is a fake, released to avoid the scandal that would occur if the real secret got out. Purportedly the real secret refers to an apostasy in the Church starting with the Pope (in other words, the Pope/Popes would stop teaching the Catholic faith and fall into error). It also describes a council which will pervert the Church (believed by many to be Vatican II which reversed many traditional Catholic principles and beliefs). This was known for at least forty years prior to the release of the Vatican version of the Secret. What is most interesting is that Sister Lucia said the secret had to be released by 1960, or after her death (whichever came first). Why she chose that specific year is unknown but, curiously, the Vatican II council was started in 1962, with both Popes of the council (John XXIII and Paul VI) saying that they would not release the third secret. Another related prophesy is also very interesting; Pope Pius XII (the Pope prior to John XXIII and the II Vatican Council) said: “We believe that the present hour is a dread phase of the events foretold by Christ. It seems that darkness is about to fall on the world. Humanity is in the grip of a supreme crisis.”
Posted by Anonymous at 1:30 AM