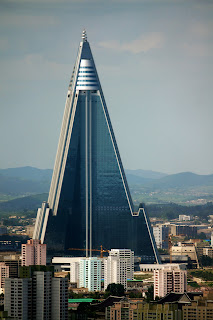 This massive pyramidal structure is a 105 story symbol for the absurdist ambitions of Kim Jong Il and the hermit kingdom. It has been under construction (on and off) for decades. It has been called the world's most hideous hotel. It is an unnecessary extravagance in a country that can barely feed its people. The project was abandoned after the fall of the Soviet Union due to Soviet subsidies to North Korea coming to an end. The hollow shell stood vacant for decades, just towering above the city - a failure too large to ignore but too painful to acknowledge. The North Koreans spent years denying the structure's existence, removing it from photographs and excluding it from maps of Pyongyang. Too much shame, it seems, in the very obvious failure. Construction on the structure resumed recently with Egyptian architectural firm Orascom leading the project. It is slated for completion in 2012, to sync with the 100th birthday of Eternal President Kim Il Sung, deceased since 1994.
Posted by Anonymous at 1:30 AM