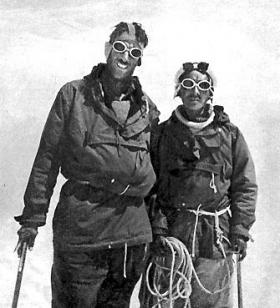 Edmund Hillary was born in Auckland, New Zealand on July 20, 1919. He studied mathematics and science at the University of Auckland. He then became a beekeeper with his brother Rex, climbing several peaks during his spare time. When World War II broke out, he joined the Air Force but withdrew his application before it could be considered. Later under conscription he would join the RNZAF as a navigator. In 1953 he set his sights on the world’s highest peak. At the time the route to Everest was closed through Chinese Tibet and the Nepalese government only allowed one expedition per year, so he had to wait for the British attempt in 1953. John Hunt, the leader of the expedition, named two teams for the ascent: Tom Bourdillion would be with Charles Evans and Edmund Hillary would be paired with Sherpa mountaineer Tenzing Norgay.

The total expedition included 362 porters, 20 Sherpa guides and 10,000 lbs. of baggage. Bourdillion and Evans were the first pair to attempt to reach the summit- they came within 100m of the apex before turning back because of exhaustion. Hillary and Norgay began their assault two days later on the South Col Route. On May 29, 1953 at 11:30am local time the pair reached the summit with Hillary placing his foot on the summit first. They stopped to take photos of their achievement and buried some sweets and a small cross before making the descent. The first person to greet them was George Lowe, Hillary’s lifelong friend, who had climbed up to bring them hot soup. Hillary met Lowe with the words “Well, George, we knocked the bastard off.” For their efforts Hillary and expedition leader John Hunt were both knighted and Norgay was awarded the George Medal by Queen Elizabeth II. Hunt was made a life peer in Britain and Hillary was a founding member of the Order of New Zealand.

Born into a Sherpa tribe in 1914, Tenzing Norgay proved to be an invaluable member of the 1953 Everest team. This wasn’t his first trip to the top of the world’s largest peak, he had been on six previous expeditions up Everest. Norgay had originally joined the expedition as a Sherpa guide but when he saved Hillary from falling to his death in a crevasse, Hillary began to think of him as the perfect climbing partner for his ascent.
Posted by Anonymous at 1:30 AM