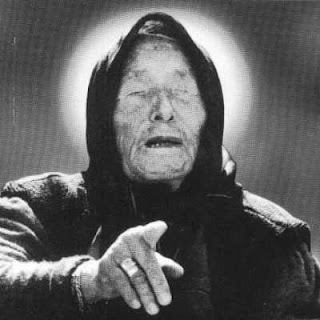 Baba Vanga was a blind Bulgarian woman (born 1911, died 1996) who was a herbalist and alleged mystic who made many predictions for the future. She became incredibly popular due to her so-called mystical powers. When she died huge crowds attended her funeral. Among her many predictions she claimed that by 4599 man would achieve immortality and that less than 100 years later we would begin assimilating with the aliens we meet on the hundreds of planets we will have populated. She claimed that in 4509 man will become sufficiently developed that he will begin to communicate with God directly. In 2221, while searching for extraterrestrial life man will come into contact with something truly terrible (though she didn’t state what). Closer to our own time she predicted a change in the Earth’s orbit in 2023. Curiously she predicted the beginning of World War III in 2010, which does not obviously appear to have happened – though her followers say the machinations may be in place for this to happen.
Posted by Anonymous at 1:30 AM