The Expansion into the West 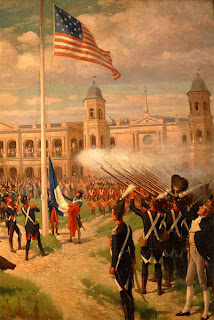 In 1803, the Louisiana Purchase turned America’s attention to the west. The American government had no idea what it had bought from France, so President Thomas Jefferson got Congress to set aside $2,500 for an expedition, just weeks after the transaction was completed. It was to be led by US Army Captain Mariwether Lewis, who selected William Clark as his partner. They left St. Louis in May 1804 with 3 sergeants and 22 soldiers, as well as volunteers, interpreters and Clark’s slave. They began by heading up the Missouri River and wintering at Fort Mandan (now the site of Bismark, North Dakota). In the spring they continued to the headwaters of the river and then crossed the Continental Divide before following the Clearwater, Snake and Columbia Rivers west to the Pacific. At the mouth of the Columbia they built Fort Clatsop, which later became Astoria, Oregon. On their return journey, they split into three groups after crossing the Rockies to map more land. They reunited near where the Yellowstone and Missouri Rivers converged and continued together to St. Louis. They arrived in St. Louis to a heroes’ welcome on September 23, 1806. Their 28-month journey proved that there was no transcontinental water route and they brought back a treasure trove of information, including maps of their route, descriptions of Plains Indian culture and observations of the environment.

Lewis and Clark were guided from Fort Mandan (Bismark) by a young Shoshone Indian woman named Sacagawea. She guided the expedition thousands of miles carrying her infant son, Jean Baptiste on her back. Her knowledge and her relationship with her people were an invaluable addition to their mission.
Posted by Anonymous at 1:30 AM