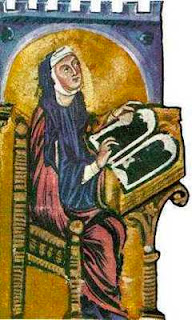 St Hildegard – a polymath nun from the 12th century was very well known for her incredible contributions to classical music and literature, she is not so well known for her prophesies (of which there were many). In one prediction it appears she is referring to the destruction of the United States: “”Before the Comet comes, many nations, the good excepted, will be scoured with want and famine. The great nation in the ocean that is inhabited by people of different tribes and descent by an earthquake, storm and tidal waves will be devastated. It will be divided, and in great part submerged. That nation will also have many misfortunes at sea, and lose its colonies in the east through a Tiger and a Lion. The Comet by its tremendous pressure, will force much out of the ocean and flood many countries, causing much want and many plagues. [After the] great Comet, the great nation will be devastated by earthquakes, storms, and great waves of water, causing much want and plagues. The ocean will also flood many other countries, so that all coastal cities will live in fear, with many destroyed. All sea coast cities will be fearful and many of them will be destroyed by tidal waves, and most living creatures will be killed and even those who escape will die from a horrible disease.” She also predicted that peace would return to Earth when the French throne is restored (very interesting when you consider that it had not been destroyed at that time).
Posted by Anonymous at 1:30 AM