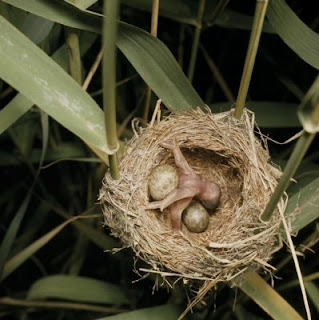 These sneaky parasites have learned a trick to childcare unfortunately shared by many of us humans: why do it yourself, when you can make it someone else’s problem? When it’s time to lay her egg, mother cuckoo simply finds the nest of another bird, drops off her own egg and never comes back. The unsuspecting hosts will raise the baby Cuckoo as their own, but the impostor’s larger size will overwork its adopted parents nearly to death, while their real chicks go hungry and may die before reaching adulthood. In some cuckoo species, the chick will even hatch early enough to push the other eggs out of the nest and kill them.
Posted by Anonymous at 1:30 AM