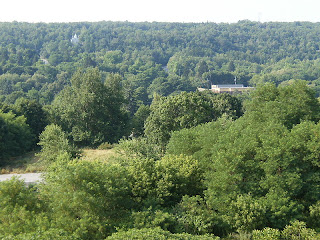 The town of Centralia, Pennsylvania is a location that was built around the coal mining industry. In the past, the area was served by two separate railroads. However, all rail services ended in 1966 when the coal mining industry went out of business. Centralia once held seven churches, five hotels, twenty-seven saloons, two theatres, a bank, a post office, and fourteen general stores. In 1962 a fire was ignited in one of the large mines below Centralia. The fire quickly spread throughout the vast mining system, ultimately making the town practically uninhabitable.

It is not fully understood how the fire was started, but one theory suggests that the event occurred in May of 1962 when the Centralia Borough Council hired five people to clean up the town landfill, which was located in an abandoned strip-mine pit. The men did not extinguish the fire correctly and it spread through a hole in the rock pit and then into the abandoned coal mines beneath Centralia. In the late 1960s and 1970s dozens of town residents were hospitalized for carbon monoxide poisoning. Sink holes began to appear in the city limits and steam ports were often reported.

The town’s population has dwindled from over 1,000 residents in 1981 to 12 in 2005, and 9 in 2007. Centralia is now the least-populous municipality in Pennsylvania. In 1984, the U.S. Congress allocated more than $42 million for relocation efforts and most people accepted a buyout and moved. In 1992, all property in the borough was claimed under eminent domain by the Commonwealth of Pennsylvania. This means the government took ownership of all land in the town.

In 2002 the U.S. Post Office revoked Centralia’s zip code. Few homes remain standing in Centralia and most of the abandoned buildings have been demolished by humans or nature. The borough is littered with signs warning of unstable ground and carbon monoxide poisoning. Smoke and steam can be seen rising from various locations in the town. The underground fire is still burning and will continue to do so for a predicted 250 more years. Interestingly, Centralia was the inspiration for the 1991 cult film Nothing But Trouble, which was written by Dan Aykroyd.
Posted by Anonymous at 1:30 AM