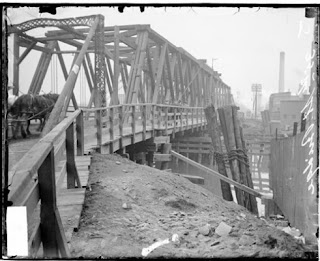 Bubbly Creek is the nickname of a section of the Chicago River located in the South Branch. The area surrounding Bubbly Creek was originally a wetland, but during the 19th century channels were dredged and the South Fork became an open sewer line for the local stockyards, especially the Union Stock Yards. During this time, slaughter houses dumped large amounts of waste, such as blood and entrails into Bubbly Creek. The creek received so much blood and animal remains that the water began to bubble with methane and hydrogen sulfide gas. The process of decomposition created the chemical reaction, which led to the nickname Bubbly Creek. In 1906, the area and its history were included in the Upton Sinclair novel titled The Jungle, which criticized the American meat packing industry.

By the 1990s, the only living animal in the creek was a large number of bloodworms. The worms are feeding on a thick mass of rotting blood which is located on the river bed. Bubbly Creek has become hypoxic due to the oxygen depletion. The creek remains highly toxic and the surrounding area is full of a rancid smell. A small amount of vegetation has returned in recent decades and the area has become occupied by residential development. A program to oxygenate the creek by continuously injecting compressed air into the water has been met with limited success. Swimming through the slimy surface of Bubbly Creek is not recommended and many Chicago locals stay away from the creek entirely.
Posted by Anonymous at 1:30 AM