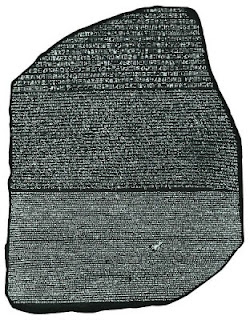 The Rosetta Stone is a black basalt stela (an ancient upright stone slab bearing markings) that dates back to 196 BC. An Egyptian decree honoring King Ptolemy V is carved into the stone in Greek, Demotic Egyptian and Egyptian hieroglyphs. The stone would have originally been displayed in a temple and was later moved and used as building material in a fort at the village of Rashid (Rosetta). It was discovered there by Captain Pierre-Francois Bouchard on July 15, 1799, during Napoleon’s campaign in Egypt. Attempts to decipher it were first made by Thomas Young, who translated the Demotic text, and by French Egyptologist Jean Francois Champollion who is generally known as the translator of the Rosetta Stone. Champollion used the Coptic language to realize that hieroglyphs served as a spoken language and not just symbols.

The discovery of the Rosetta Stone and the realization that it is the same passage written in three languages allowed scholars to get a glimpse into a civilization that for a long time had been a mystery to scholars. Egyptologists have been able to figure out the entire Ancient Egyptian language from its inscriptions.
Posted by Anonymous at 1:30 AM