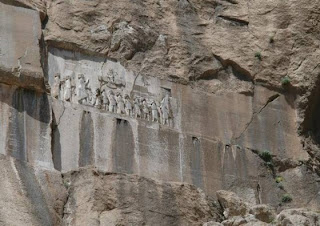 Discovered by Englishman Robert Sherley in 1598 while on a diplomatic mission to Persia, the Behistun Rock is a multilingual inscription authored by Darius the Great. The inscription begins with Darius’ autobiography and goes on to describe several events following the deaths of Cyrus the Great and Cambyses II. Much like the Rosetta Stone, the Behistun Rock includes the same passage in three cuneiform script languages: Old Persian, Elamite and Babylonian. The text was translated in stages by Georg Friedrich Grotefend (Old Persian), Sir Henry Rawlinson, Edward Hincks, Julius Oppert, William Henry Fox Talbot and Edwin Norris.

Not only does the inscription give us a look into the mind of Darius the Great, but it was also instrumental in opening up the cuneiform script. Archeologists gained a greater understanding of civilizations like Mesopotamia, Sumeria, Akkadia, Persia and Assyria by being able to decipher cuneiform.
Posted by Anonymous at 1:30 AM