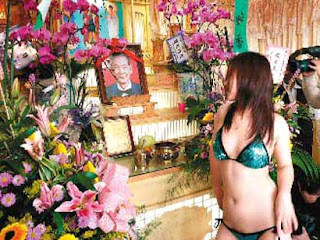 This unorthodox way to mourn the deceased has its roots in a Chinese custom to believe that the quality of the deceased's afterlife is based on their funeral attendance! However, authorities began cracking down on this unusual practice. Funeral strippers have been arrested and Chinese citizens can report "funeral misdeeds" to a government hotline for a monetary reward.

Strippers are not the only quirky funeral ritual in China, though! The Chinese choose to wear white instead of black, which would seem quite strange to Westerners. Mourners have also been known to crash cymbals and set off fireworks during the funeral procession!
Posted by Anonymous at 1:30 AM