First Circumnavigation of the Earth 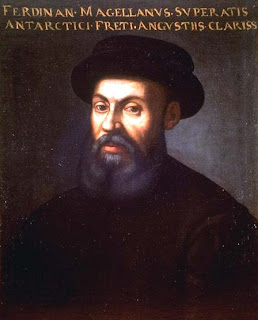 Ferdinand Magellan was born in 1480 in Sabrosa, Portugal. His parents both died when he was ten and young Ferdinand became a page to Queen Leonor. His young adulthood was spent fighting throughout Egypt, India and Malaysia. Despite his service he was not favored by the crown and in 1517, accompanied by cosmographer Ruy Faliero, he offered his services to the Spanish court in Seville.

At the time, the Treaty of Tordesillas had divided the New World: Portugal held Brazil to the East Indies and Spain held western Brazil to the 134ºE meridian. Magellan wanted to test the assumption that the Spice Islands (Molucca Islands) belonged to the Spanish side. King Charles V of Spain endorsed the expedition, so Magellan led five ships from Spain on September 20, 1519. They sailed to Brazil and then down the South American coastline to San Julian, Patagonia where they wintered. While in San Julian, there was an attempted mutiny- one mutinous leader was beheaded, others marooned. Other guilty crewmembers worked in chains. Afterwards, three of the five shops passed cautiously through the Strait of Magellan. Next, they landed in Guam and then sailed to Cebu in the Philippines, where Magellan decided to fight in a war in an attempt to gain favor with a local ruler. Magellan’s brother-in-law Duarte Barbosa and the commander of one of the ships, Joao Serrao, were killed in battle. Most of the rest of crew became sick and the few survivors were forced to destroy one of the ships. Magellan died in battle during a raid when the ship officers delayed assistance, hoping that he would be killed in battle. Juan Sebastian del Cano, a former mutineer, completed the first circumnavigation of the Earth, reaching Seville on September 8, 1522.

Magellan’s voyage was unguided as he was the first to make such a journey. He was however accompanied by a crew of 234 men from Spain, Portugal, Italy, Greece and France.
Posted by Anonymous at 1:30 AM