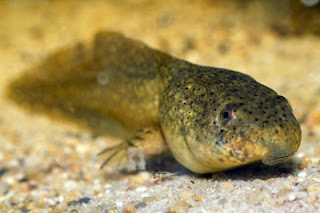 Certain species of burrowing “spade foot” toads inhabit desert areas where water can be quite scarce and rapidly disappears during the dry season. To ensure the survival of at least a few offspring, their tadpoles come in two distinct forms: omnivores that live primarily off algae, carrion or small insects, and carnivores that live primarily off the flesh of the smaller, weaker omnivores. As water begins to dry up, some of the omnivores will transform into carnivores, and the rest will serve as an emergency food supply. It sounds rather cruel, but on a sweet note, they have been shown to avoid eating their own immediate brothers and sisters…at least until there’s no other option.
Posted by Anonymous at 1:30 AM