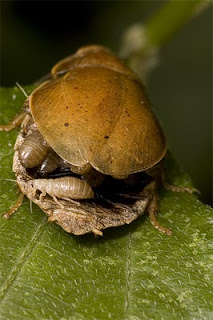 Cockroaches suffer one of the worst reputations in the animal kingdom, but far from deserved; of the thousands of species known, only a handful ever could or ever would invade your kitchen, they play integral roles in ecosystems around the world, they’re much more sanitary than you think, and some of them are even highly devoted parents. How devoted? Phlebonotus pallens, an amphibious cockroach from India, carries her young under her wing cases, specially shaped for this purpose and useless to actually fly. Nestled under this protective shield, the young chew tiny holes in their mother’s back and feed on her hemolymph (insect “blood”) using special fang-like mandibles they will lose as they grow older.
Posted by Anonymous at 1:30 AM