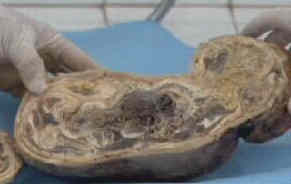 Zahra Aboutalib, from Morocco, delivered a child she’d been carrying for almost half a century. This shocking yet fascinating story began in 1955 when Zahra went into labor. She was rushed to a hospital, but after watching a woman dying on the operation table during a Caesarean section, Zahra fled back in her small village outside Casablanca. After the pains were gone and the baby stopped kicking, Zahra considered him a “sleeping baby”. “Sleeping babies” are, according to Moroccan folk belief, babies that can live inside a woman’s womb to protect her honor.

When Zahra was 75, the excruciating pains occurred again. Doctors performed an ultrasound test and discovered that her “sleeping child” was actually an ectopic pregnancy. What is even more amazing is how Zahra survived and how the dead fetus was accepted by the body just like another organ. Generally, this doesn’t happen. If not discovered in time, the growing fetus will eventually strain and burst the organ that contains it. Under these circumstances, the mother has few surviving chances. After nearly five hours, the surgeons successfully removed Zahra’s calcified fetus.

Stone babies, lithopedions, are an extremely rare medical phenomenon. According to the Journal of the Royal Society of Medicine, only 290 cases of stone babies have been documented.
Posted by Anonymous at 1:30 AM