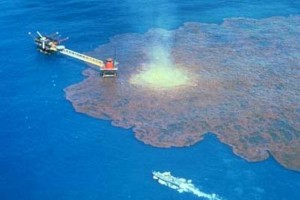 The Ixtoc I incident in Mexico is one that did not involve a tanker. Instead, the spill of 138 million gallons of oil was caused by a faulty offshore oil well. Pemex, a Mexican petroleum company, was attempting to drill an oil well when an unexpected blowout occurred on June 3, 1979. In no time the oil ignited, the drilling rig collapsed and oil began to freely flow into the Gulf of Mexico. Officials predicted that 10,000-30,000 barrels of oil a day were going into the Gulf. The horrible part is that it took almost a year to stop the leak. It was successfully capped in 1980, only after millions of gallons of oil had polluted waters.

Thankfully, Mother Nature helped with the Ixtoc I oil spill. Westerly winds and storms were able to keep the oil away and off of beaches near southeastern Texas and eastern Mexico, although some of the oil did reach South Padre Island. Beaches were soiled, but the outcome could have been much worse if the weather did not cooperate.
Posted by Anonymous at 1:30 AM