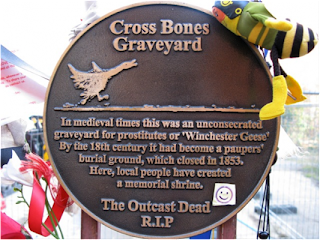 Tudor historian John Stow wrote in his 1603 Survey Of London: “These single women were forbidden the rites of the church, so long as they continued that sinful life, and were excluded from Christian burial, if they were not reconciled before their death. And therefore there was a plot of ground called the Single Woman’s churchyard, appointed for them far from the parish church.”
Posted by Anonymous at 1:30 AM