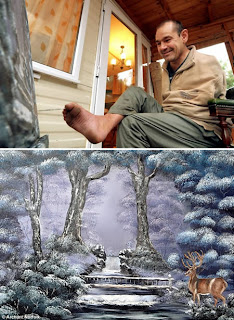 This amazing festive image was painted by an armless thalidomide victim, using his right foot. Peter Longstaff's artwork pieces include flickering candles and another depicts a stag in a magical winter wonderland setting. And as well as teaching himself to paint, the 48-year-old has lived life to the full as a pig farmer, father and youth football coach.

Peter was one of many babies born with deformities in the late 1950s and early 60s when their pregnant mothers were given the drug thalidomide to combat morning sickness.
But as a boy he learned to use his right foot like a right hand and was independent enough to complete main stream schooling growing up on Teesside. Peter said: 'My right foot is like your right hand. I figured out ways of doing things.' He opens doors and turns on light switches standing on one leg, using a mixture of agility and balance. As a teenager he had to endure cruel comments from 'ignorant people' but took it in his stride. His ability to get around between home, studio and sports field is down to an adapted Range Rover, which he steers with a plate under his left foot, but which is otherwise a standard automatic. He was once stopped by a stunned policeman who spotted he had no hands on the wheel - but quickly understood when he opened the door. Peter's artwork was on show at the Royal College of Art in London in 2009.
Posted by Anonymous at 1:30 AM

Email ThisBlogThis!Share to TwitterShare to FacebookShare to Pinterest
Labels: Art