The Most Magnetic Substance 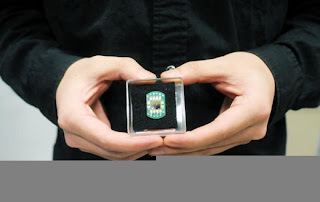 If Magneto was a small black lump, that would be him. The substance, developed in 2010 out of iron and nitrogen, is 18% more magnetic than the previous record holder, and is so powerful, it has forced scientists to revisit how magnetism works. The man who discovered the substance has taken great pains to ensure that his work can be reproduced by other scientists, because a similar compound was reported developed in Japan back in 1996, but other physicists could not replicate it, so it was never officially accepted. No word on whether Japanese physicists have to commit Sepuku under these circumstances. If it can be reproduced, it could spell a new age of efficient electronics and magnetic engines
Posted by Anonymous at 1:30 AM