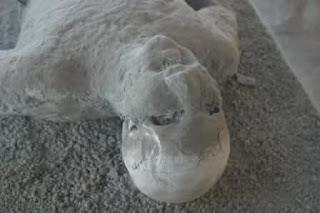 Pompeii was an ancient city that had been founded in the 6th century BC by Oscan-speaking descendants of the Neolithic inhabitants of Campania, later coming under Greek, Etruscan, Samnite and finally Roman control. As a Roman colony it prospered as a port and as a resort destination, evidence of which can be found in the many villas, temples, theaters and baths built throughout the city. Pompeii also had an amphitheater, a forum, and a basilica and was home to around 20,000 citizens. In 63 AD an earthquake caused extensive damage to Pompeii and in the years that followed there were attempts to repair some of the damage. Then terror struck on August 24, 79 AD when the nearby volcano of Mount Vesuvius erupted and blanketed the city in cinders and ash. Pompeii was discovered in 1599 by Domenico Fontana while he was working on a hydraulics project, but remained unexcavated until it was rediscovered in 1748 by Spanish military engineer Rocque Joaquin de Alcubierre.

The ruins of Pompeii give archeologists a unique perspective into Roman life: the daily workings of a living city. We can get a clear snapshot of a city in crisis because the ash has preserved everything so well- including families huddling together, criminals still in chains, animals left where they stood and perfectly preserved frescoes.
Posted by Anonymous at 1:30 AM