118 Days Without A Heart 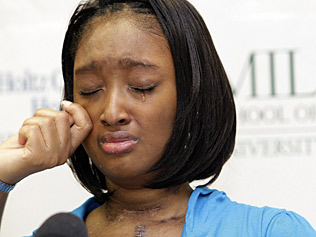 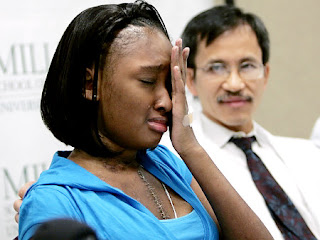 D’zhana Simmons of South Carolina is literally a walking, talking, medical miracle. The brave teenager lived for about four months without a heart, as she awaited a new, functional heart to replace the damaged one. Simmons suffered from dilated cardiomyopathy (DCM), meaning her weak and enlarged heart wasn’t pumping blood efficiently. The surgeons from the Miami Holtz Children’s Hospital performed an initial transplant on July 2, 2008, but the heart malfunctioned and had to be quickly removed. Meanwhile, D’zhana was kept alive by a custom-built artificial blood-pumping device. “She essentially lived for 118 days without a heart, with her circulation supported only by two blood pumps,” said Dr. Ricci, Director of Pediatric Cardiac Surgery.
Posted by Anonymous at 1:30 AM