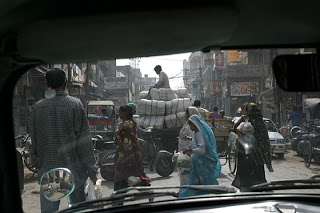 Constructed by the Pashtun emperor Sher Shah Suri in the 16th century, India’s Grand Trunk Road (also known as GT) spans more than 1,500 miles from Bangladesh in the east to Pakistan in the west, serving as one of the main thoroughfares across the Indian subcontinent. Over the years, it has functioned both as a major trade route and as a convenient right-of-way for invading armies.

GT is considered dangerous not because of risky heights or disheartening road conditions, but because of the traffic congestion. Trucks, buses, bicycles, pedestrians, and animals have turned parts of this heavily-used road into a major headache.
Posted by Anonymous at 1:30 AM