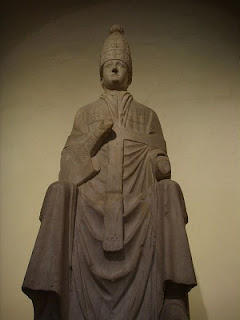 Born to a minor noble family in Anagni, Italy, Benedetto Caetani became a successful student of canon law and later a member of the Roman Curia, eventually winning the position of cardinal priest in 1291. He was elected Pope Boniface VIII on December 24, 1294 after the pious yet incompetent Pope Celestine V abdicated (possibly due to Boniface’s own insistence). One of his first decisions as pope was to sentence Celestine to prison in the Castle of Fumone, where the old man was mistreated and eventually died ten months later.

Boniface quickly became one of the church’s strongest advocates for papal supremacy in both spiritual and civil matters, involving himself in foreign affairs to no end. His desire for political domination, of course, did not sit well with many rulers of the day, such as Philip IV of France, whose policies of clerical taxation angered the pope and prompted a string of bulls culminating in the famous Unam Sanctam, which essentially claimed all civil and spiritual authority for the papacy.

Other famous clashes include Boniface’s feud with the powerful Colonna family, which led to several of their towns being demolished – Palestrina, for example, was razed to the ground and 6,000 citizens were killed. In addition, Boniface aroused the anger of Dante Alighieri, whose portrayal of the pope in his Inferno is anything but kindly, since he places Boniface in the eighth circle of his imaginary hell.

Boniface never quite attained to the absolute power he craved. Not surprisingly, his insatiable ambition led directly to a brutal beating at the hands of those who refused to submit to him, and within a month of this incident he was dead.
Posted by Anonymous at 1:30 AM