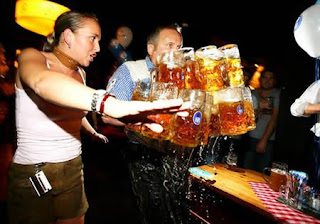 An Australian beat the Germans at their own boozy game, smashing the world record for carrying stein glasses full of beer. Bavarian-born restaurant manager Reinhard Wurtz, an Australian citizen, broke the record for carrying one-litre steins of beer, when he carried 20 for 40 metres last. With each beer-filled stein weighing at least 2.5 kilograms, Mr Wurtz carried 50 kilograms of beer and glass in the record-breaking effort. The previous record of 16 steins was held by German barmaid Anita Schwartz
Posted by Anonymous at 1:30 AM