The Kingdom of Redonda 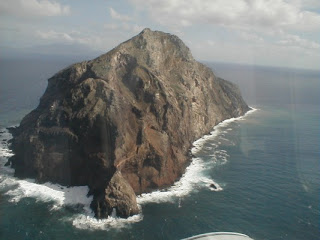 The back-story on the Kingdom of Redonda has been built up over the years by a number of artists and novelists, so its history is more than likely a mixture of fact and fiction. But as the story goes, in the 1800s Matthew D. Shiell, a resident of the Caribbean Island of Montserrat, made a claim on the rocky and uninhabited island of Redonda. The island is almost totally desolate, so Sheill never lived there, but he did serve as “King” from a distance and passed the crown on to his son M.P. Sheill in 1880. According to legend, Sheill even wrote to England’s Queen Victoria and requested that she recognize him as King of the island, to which she replied that she would, as long as he never rebelled against the crown.

M.P. Sheill later became a famous writer, and it was he who first told the story of Redonda and established most of its customs, including the flag and the style of government (absolute monarchy). He then passed the crown on to his friend John Gawsworth, who went by the name King Juan I. Since then, the crown and its power over Redonda’s 100 “citizens” have passed through a number of hands, and today there are as many as three would-be kings claiming the thrown. Perhaps the most famous of these is the Spanish writer Javier Marias. He has given out ceremonial titles in the Redondan kingdom to a number of artists, among them Francis Ford Coppola, Ray Bradbury, and Alice Munro.
Posted by Anonymous at 1:30 AM