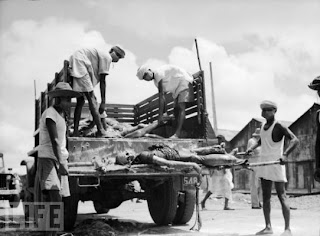 This riot stands as the deadliest Muslim-Hindu riot in history. Direct Action Day, also known as the Great Calcutta Killing, happened on August 16, 1946, and ended with 4,000 people dead and almost 10,000 people homeless. The riot occurred in a place now known as Kolkata, a city in the province Bengal in British India, which at the time was known as Calcutta. During the 1940s Constituent Assembly of India, the Indian National Congress and the Muslim League were at odds when the British government was opting for independence of the Indians. However, this plan did not satisfy everyone, mainly the Muslims who were long seeking an independent and separate Pakistan; however, this plan was shot down without thought. The riot began on the 18th day of Ramadan, and was planned to be peaceful, but turned out to be anything but.

With plenty of unhappy Muslims because of the decision for Indian independence, Hindus living within Calcutta were attacked on a massive level. Muslims used clubs, knives, guns, and other weapons to kill any Hindu they saw, including young children and women. Some even say that women were beaten, raped, and buried alive. The unhappy rioters would even stone offices and set various businesses on fire. To get revenge, the Hindus then began to attack Muslim mosques as well as the Muslim slums. The fighting not only caused death, but thousands of injuries as well as shortages within the city. Those who survived were often left homeless and had to wander to look for food as well as some place of safety.

The rioting seemed to end and die down on the 21st day of Ramadan, and at this time an estimated 4,000 people were dead, though some sources have said the death toll was around 7,000-10,000. The fighting was so bad that even police forces from both sides were unable to control it, let alone stop it completely. Many times, the police forces became those who picked up the dead bodies and put them alongside the road to avoid anymore trauma while the fighting continued. On August 22, the riots finally ended after British troops were sent in to calm the violence. During the riots, many people left their homes, but those who did not leave were subject to the violence. With over 100,000 injured, the riots didn’t end in Calcutta. In fact, Direct Action Day sparked various other riots throughout India.
Posted by Anonymous at 1:30 AM