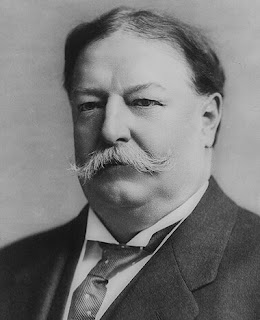 William Howard Taft was the 27th President of the United States of America, serving from 1909 to 1913, and served as the 10th Chief Justice of the United States. Taft was severely overweight; legend says he became stuck in the bathtub in the White House several times, prompting the installation of a new bathtub capable of holding all of the men who installed it, something the White House denied. At 6 feet, and weighing over 350 pounds (159 kg), Taft is the heaviest person to be President, although Jefferson, Lincoln, Kennedy, Lyndon Johnson, and Clinton were taller. While governor of the Philippines, Taft one day sent a message that read "Went on a horseride today; feeling good." Secretary of War Elihu Root replied, "How's the horse?"
Posted by Anonymous at 1:30 AM