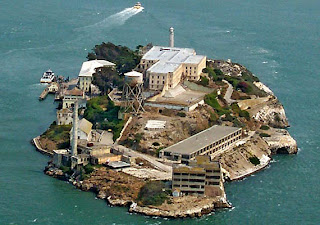 San Francisco, CA – This prison, known as “The Rock”, or “Devil’s Island” was built to house the criminals of the 1920′s, who broke laws during the times of Prohibition leading into the Great Depression. Another study in stark, soul-destroying discomfort and isolation, Alcatraz was known for its unique design, which made escape almost unthinkable. Inmates had no contact with the world outside the prison gates, and suffered harsh discipline from prison officials, as well as an inhumane policy of “silence” that forced prisoners to forgo speech for long periods of time. As can be expected, this was no boon to mental health, and many inmates went insane as they were forced to endure the stringent conditions of the prison without any conversation or other release of their emotions. The prison was shut down in 1963, but its grim legacy lives on, in film and legend.
Posted by Anonymous at 1:30 AM