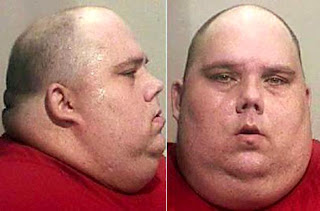 A 600-pound Florida man, arrested for scamming restaurants in 2007, was offered a plea deal when prosecutors discovered it was too expensive to incarcerate him. George Jolicoeur, 38, is infamous for ordering food and then complaining about the quality and refusing to pay after he eats it. The obese thief once devoured five milk shakes before finding a hair in the shake and refusing to pay. Jolicoeur was arrested in 2007 after downing nearly $50 of beef jerky from a 7-Eleven, then claiming the last few scraps were moldy. Police tracked him down at home and arrested him.

After Jolicoeur was charged with five counts of felony petty theft, he became ill and bedridden. He now resides in a nursing facility and relies on a respirator to breathe. After prosecutors discovered that the state would have to foot the bill for Jolicoeur's medical care they offered a plea deal
Posted by Anonymous at 1:30 AM