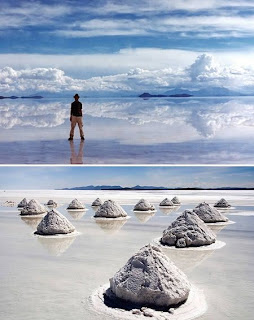 The Salar is one of the iconic images of Bolivia, a massive salt desert in the middle of the Altiplano. It is an expansive, virtually flat desert that reflects the sun in such a way as to create a mirror effect with the sky. There are several lakes in the desert with strange colours from the mineral deposits in the region. Some 40,000 years ago, the area was part of Lake Minchin, a giant prehistoric lake. When the lake dried, it left behind two modern lakes, Poopó Lake and Uru Uru Lake, and two major salt deserts, Salar de Coipasa and the larger Uyuni. Uyuni is roughly 25 times the size of the Bonneville Salt Flats in the United States. It is estimated to contain 10 billion tons of salt, from which less than 25,000 tons is extracted annually.
Posted by Anonymous at 1:30 AM