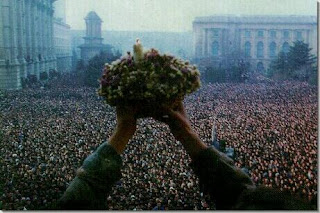 The Romanian Revolution of 1989 proved to be violent from the very beginning, and it only elevated until the fighting ceased, a week after it began. Before the riot, citizens in Romania were unhappy with various things. The first is Nicolae Ceau?escu’s move to entirely wipe out the state’s debt. To do this, he decided to export a large amount of goods from Romania in exchange for international currency. Even if his plan would have worked, most people within the country became increasingly poor and shortages in various items were common. Things such as television, food, clothing, electricity, and plenty of other things were cut short. However, as silly as it sounds, while attempting to lessen the debt, he also held parades and celebrations to celebrate himself and his wife, which only drained more money. People were also very concerned about the country’s secret police, who were seemingly trying to turn the country into a police state. Free speech was taken away, books were censored, radio channels were banned, and no one was to criticize the regime. All of this greatly angered many citizens, and most believed that a revolution was inevitable.

With a majority of unhappiness spreading throughout the country, it was no surprise that the Romanian government was in serious trouble. The first real protest began on December 16, 1989 when Romanian officials were attempting to get rid of Laszlo Tokes, a dissident. He had spoken out against the government which caused him to lose his job as a pastor, though many citizens stood up for him and found ways to protect him from being evicted from his home. With crowds gathering around Tokes’ home, the police force was called in, and despite the ruling being turned over, the people were furious and did not leave, which meant that the police had to use force to break up the gathering. They were successful in doing so but many regrouped later in the day. The next day a group of rioters broke into the District Committee building and trashed everything, including propaganda and brochures and even attempted to set the building on fire, which failed. As the riot grew worse, the police force was called in, but this proved to be futile, so tanks and armored personnel carriers were called in, as the police was unable to stop the shootings, fires, and fights. Riots continued each day, but the largest occurred on December 21, when nearly 100,000 people came together, many of them shouting anti-government chants and calling for the resignation of Ceau?escu, which did not happen.

Rioting continued and the crowds grew larger as Ceau?escu made a visit to Iran. His police force was still unable to control the rioters and because of this, he was forced to give a speech denouncing the riots and explaining how the events were putting the country at risk internally. However, the rioters were hearing none of it and more poured into the streets. To confront them, tanks, soldiers, and troops were all sent in, despite the fact that the rioters were unarmed. Gunfire came from various different buildings, wounding many and killing even more. With the rioting still continuing, Ceau?escu decided that it was time to flee. Thinking that the riots were suppressed somewhat, he opted to leave on the morning of December 22. Ceau?escu along with his wife raced to get into the helicopter that was set to take them to a remote location; however, rioters weren’t far behind him. Though successful at getting off the ground, the pilot, with 6 people in his 4 passenger helicopter, complained of false engine-troubles and landed in a field. Here those in the helicopter attempted to flag down cars to get away, but Ceau?escu was picked up, along with his wife, and arrested. They were put on trial and eventually executed, thus ending the revolution.
Posted by Anonymous at 1:30 AM