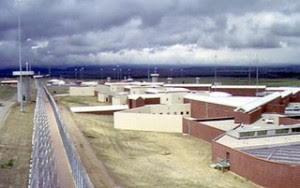 Colorado – This prison was built in response to the violent attacks on guards and prison staff at other US prisons – it was meant to be the ultimate deterrent, a place where inmates were completely isolated from prison staff, and left to live in slow psychological torture as they spent 23 hours a day in barren cells. Inmates at ADX are the worst of the worst, often repeat offenders who have killed or injured other inmates, or even prison guards, during their time in other institutions. Describes by inmates as a nightmare vision of punishment, “meant to inflict misery and pain”, this “clean version of hell” is also a violent place, despite all the steps taken to segregate and isolate the general population. In its 13 years of operation, two prisoners have been killed at ADX Florence. Another prisoner, named Lawrence Klaker, was shot and injured as he entered the Supermax prison for the first time: he later killed himself within prison walls.
Posted by Anonymous at 1:30 AM