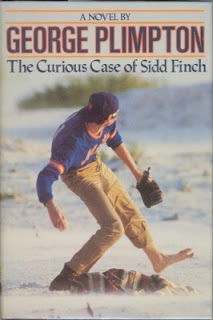 Legendary journalist George Plimpton is famous for trying out for the Detroit Lions and sparring with Sugar Ray Robinson, but one of his most memorable stunts was the creation of a phantom baseball player. In April of 1985, Plimpton engineered one of the all-time greatest April Fools’ Day hoaxes when he published an article in Sports Illustrated detailing the arrival of baseball’s next super star, an unknown pitcher called Hayden “Sidd” Finch. The piece stated that Finch was a mysterious 28-year-old who’d spent time studying at Harvard and searching for inner peace in the Far East. He’d never played organized baseball before, but thanks to an unorthodox wind-up that gave him the ability to throw the ball an unbelievable 168 mph, he was considering signing up with the New York Mets. Plimpton’s article went on to discuss Finch’s many eccentricities, which included wearing only one hiking boot when on the mound, playing the French Horn at a professional level, sleeping on the floor, and speaking in cryptic Zen koans. The article was accompanied by pictures of Sidd Finch—played by an unknown high school teacher named Joe Berton—hanging out with other Mets players like Lenny Dykstra and talking to coach Mel Stottlemyre. After a brief uproar of fascination and disbelief—Sports Illustrated received almost 2000 letters about the story—the magazine announced that Finch had held a press conference announcing his retirement from baseball. A week later, they finally came clean about the hoax.
Posted by Anonymous at 1:30 AM