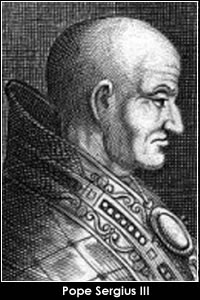 The son of a Roman noble and a member of the ultimately unsuccessful faction which opposed the policies of Pope Formosus, Sergius III must chiefly be understood through the biased writings of his enemies, since almost all sympathetic accounts have been destroyed.

Nevertheless, what we do have on Sergius suggests that he didn’t quite measure up to Christian standards for piety. He was accused of ordering the murders of his predecessor Pope Leo V and Antipope Christopher in prison. It is said that his mistress was the young Marozia (later to become a powerful Roman noblewoman), and it was their son who became Pope John XI in 931.

It gets weirder, though. Pope Stephen VI’s infamous Cadaver Synod had been declared void by succeeding popes, but when Sergius came to power, he voiced his displeasure with Formosus by annulling all of his recently reinstated ordinations. There is even a report that Sergius had the corpse of Formosus exhumed, tried, beheaded, and thrown into the Tiber – all over again!
Posted by Anonymous at 1:30 AM