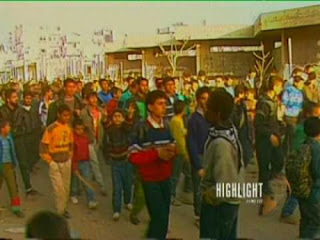 Though there have been plenty of Intifadas throughout history, this one stands as one of the deadliest. The First Intifada began on December 8, 1987 when an Israeli army tank somehow got into an accident with Palestinians at the Erez Crossing who lived on the Gaza strip at the Jabalia refugee camp which killed four and seriously injured seven others. However, the Palestinians believed that this was no accident, as a few days earlier a Jewish man was stabbed to death in a nearby location. With this and long record of hostility between the Palestinians and Israelis, riots started to erupt in various locations.

For a pretty long time, the Palestinians and the Israelis have had nothing short of bad history. During the First Intifada, the Palestinians were outraged that Israelis were occupying Palestinian territories, including the West Bank and the Gaza Strip. They say that the Israelis had been deporting and executing Palestinians. Because of this, people began to gather and decided to show their disapproval at the Jabalia refugee camp, which then lead to various other uprisings in the Gaza Strip, the West Bank, and East Jerusalem. Even though by the end of it all 2,326 were dead, the riot did start out very peaceful. The Palestinians practiced resistance, strikes, barricades, tax refusal, and other methods that weren’t harmful to anyone. However, these acts eventually turned very violent and deadly and much more widespread. During the riots, plenty of Palestinian leaders were killed, including Abu Jihad. By the end of it all, 2,326 people were dead, and scores more injured.

The riots began to die down in 1991, was the Palestinians weren’t getting anywhere and a clear direction was no longer in site. Palestinian people were being slaughtered each day, and the Palestine Liberation Organization was losing members. However, the Intifada did change numerous things. For one, the decision to combine Palestinian areas with Jordan was no longer considered. Also, many countries, including the U.S. spoke nationally about Israel’s wrong-doings, which isn’t something that many countries do. The rioting also brought about plenty of international discussion as to who should own the Gaza Strip and various other locations.
Posted by Anonymous at 1:30 AM