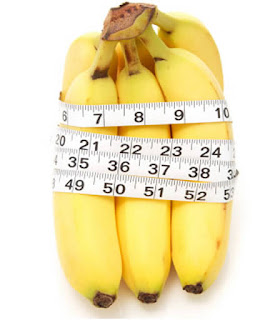 You have to be early to get a banana these days in Tokyo. Such is the appeal of a new banana diet craze sweeping Japan that importers can no longer satisfy demand for the previously unfashionable staple. Many Japanese have decided the best method is that advocated by Hitoshi Watanabe, 31, a salary man who ballooned after leaving university and entering the rat race - until he discovered the nutritional appeal of the banana. In 2006, his girlfriend Sumiko, a pharmacist with training in Chinese herbal medicine, recommended a simple, stress-free diet that revolved around one straightforward (nutritionists say questionable) premise: a breakfast of raw bananas and room-temperature water can boost the metabolism so much it allows the dieter to eat almost anything for lunch and dinner and still lose weight. Over the next six months he dropped a further 13 kilograms, married Sumiko and posted his story on Mixi, Japan's version of MySpace, to instant acclaim from other desperate dieters.

The story became the first of a series of banana-diet books which have sold more than 600,000 copies - making Hitoshi a publishing sensation. The saturation media coverage has helped drive a huge run on bananas. And since, Tokyo Broadcasting System ran a TV program last month about how the former opera singer Kumiko Mori knocked 7 kilograms off.

The fruit's newfound popularity has been attributed to the simplicity of Hitoshi's weight-loss method. Dieters are expected to dine by 8pm and be in bed by midnight. They should avoid, but not necessarily cut out, alcohol and fatty foods. Best of all: they should feel no obligation to exercise. Although Hitoshi's approach has been endorsed by biomedical expert Dr Noboru Motohashi, who says he lost 12.6 kilograms on a similar fruit diet, it has raised the eyebrows of other nutritionists. "Eating only one kind of food in the long term is not healthy because you cannot get the necessary nutrition."
Posted by Anonymous at 1:30 AM