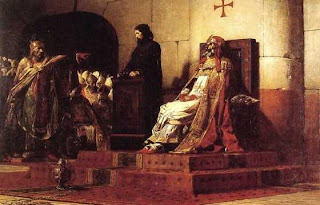 Little is known about Pope Stephen VI’s personal life and background, although he was a Roman and the son of a priest named John. The reason his name stands out in church history is because of his involvement in what is perhaps the most bizarre ecclesiastical trial of all time – the Cadaver Synod of January 897.

As the name reveals, this grotesque synod was convened to put a corpse on trial. Stephen ordered it for the sole purpose of passing judgment on the freshly-exhumed body of Formosus, who had held the papacy from 891-96. Due to activities in Bulgaria which compromised his duties as bishop of Porto, Formosus had been excommunicated by then-pope John VIII (872-882), but after John VIII’s death he had reassumed his bishopric in Porto and was elected pope in 891.

Political interests regarding rightful claims to the throne of the Holy Roman Emperor resulted in animosities that created a trickle-down effect and impacted later popes. Stephen VI and the Cadaver Synod are the most famous instance of reactions to Pope Formosus.

While it is not perfectly clear who exactly instigated the trial, the fact of the matter is that Stephen ordered Formosus’s body to be disinterred and seated on a throne in the Basilica of St. John Lateran in Rome. A deacon stood next to it to act as its spokesman while Stephen lambasted it with accusations.

The corpse was condemned for transmigrating sees, committing perjury, and acting as bishop after being deposed. As punishment, his body was stripped of its vestments, the three fingers of the right hand used for benedictions were cut off, and all his former ordinations were declared null. The body was then buried, exhumed again, and finally thrown into the Tiber River.
Posted by Anonymous at 1:30 AM