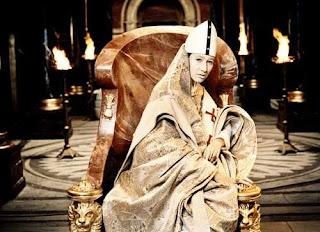 One of the most famous Popes of all time is the one that modern day scholars believe probably didn’t exist. Pope Joan was a figure who was once believed to have served as Pontiff for a few years around 853-855 A.D. Her story first appeared in the 13th century writings of a Dominican Friar called Jean De Mailly, and for centuries it was a well-known legend in Europe. The tale came in many forms, but the most popular version described Joan as pious and brilliant woman who, after disguising herself as a man, rose quickly through the ranks of the Catholic Church and was chosen as Pope. Her reign supposedly came to an end when, while riding on horseback one day, she suddenly fell ill and gave birth to a child. Here the story takes many different turns: some versions say she died in childbirth, others say natural causes, and others still say that an angry mob murdered her. While historians have found enough evidence to reject the idea that Pope Joan ever really existed—some have claimed that the tale originated in a satirical story about Pope John XI—there’s no denying her legend played a major part in the religion of the Middle Ages. Religious scholars and popular writers like Boccaccio often made references to her, and there are reports of statues of her being erected. The legend persisted for several hundred years, and it took until 1601 before Pope Clement VIII officially denied the story.
Posted by Anonymous at 1:30 AM