Last Man To Set Foot On The Moon 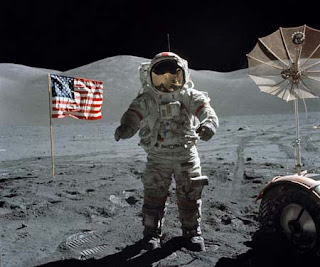 In December of 1972 the astronauts aboard NASA's Apollo 17 spacecraft made the sixth and final lunar landing in history thus far. Commander Eugene Cernan and Lunar Module Pilot Harrison Schmitt took a total of three spacewalks over the course of the seventy-five hours that they spent on the surface of the moon. During these walks they collected samples and detonated explosive scientific devices.

Though Schmitt was the last person to step onto the surface of the moon, he re-entered the spacecraft ahead of Cernan, making Cernan the world's last person to ever set foot on the Moon.
Posted by Anonymous at 1:30 AM