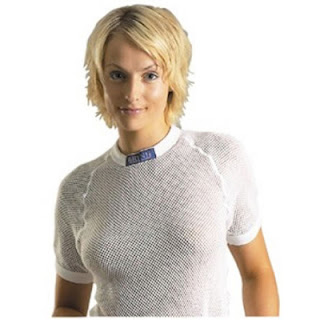 So-called "slasher" flicks may never be the same, thanks to an innovative Japanese company's new "knife proof" T-shirts. The owner of Nihon Uni, a uniform maker based in Osaka, Japan, was inspired to create a super-strong yet practical shirt by watching news reports of knife attacks against children and convenience store clerks.

Gun ownership (and gun crime) is extremely rare in Japan so bullet-stopping clothing used by the world's armies is unnecessary.

Instead, knives are attackers' usual weapons of choice and Nihon Uni acted on that premise when designing the new anti-knife T-shirts.

Nihon Uni first looked at the tough aramid fiber (often referred to by DuPont's brand name, "Kevlar") used in military body armor, then reduced the thickness and density of the ultrahigh molecular weight polyethylene fiber so that it could be flexible enough to serve as everyday clothing. The resulting T-shirts are about three times as strong as those made from cotton fibers, yet are still light enough to be comfortable and machine washable.