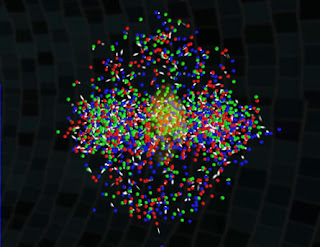 There are few things known to man hotter than the interior of a freshly microwaved Hot Pocket, but this stuff manages to break even that record. Created by smashing gold atoms together at nearly the speed of light, it’s called a quark-gluon soup, and it reaches a balmy 4 trillion degrees Celsius, a mere 250,000 times hotter than the inside of the sun. The amount of energy released in the collision was sufficient to melt protons and neutrons, which in itself could be featured on a list of things you never even knew were possible. Scientists think this substance could give us an idea of what the birth of our universe was like, so it’s good to see they aren’t just creating tiny supernovas for the fun of it. However, the really good news is that the soup was only a trillionth of a centimeter across, and only lasted for a trillionth of a trillionth of a second.
Posted by Anonymous at 1:30 AM