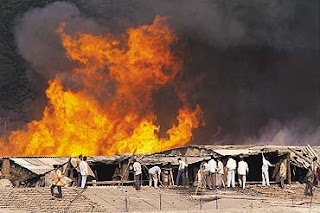 From December 1992 to January 1993, the Bombay riots took prevalence in various cities. Both Muslims and Hindus were killed during the riots, which were said to be attended by 150,000 people, if not more. With so many people crowding together, it’s no wonder that deaths and injuries occurred. Various stories of the riots have been used in movies as well as in literature.

The riots were fueled by news of the demolition of the Babri Masjid, which was a mosque in Ayodhya, India by the Liberhan Commission. The demolition of this mosque sparked a lot of anger in the city, as many believed that the government would protect the mosque from being torn down; however, this didn’t happen, and as news spread of the demolition, more and more people gathered to express their emotions. People flooded the streets, often attacking public property, including buses. As crowds and violence grew, the police force grew violent as well. Several shots were fired, which killed many and the Muslims and Hindus began to fight amongst themselves. After this, riots sparked in Dongri, in which Hindus revenged against the Muslims after Hindu workers were killed. The violence continued and the police force grew more restless, continuing to kill rioters. However, rioters continued their violence as well.

Once the riots died down after the Hindus and Muslims came together to save the Islamapura mosque , the damage in various cities was already done; $3.6 million worth of damage. By the end of it all, 900 people were dead and about 2,000 were injured. However, soon after the Bombay riots ending, the Bombay bombings occurred that killed about 250 people. While riots are never a good memory, various movies have been made to depict the rioting that occurred, the most recent film being Slumdog Millionaire. Other movies have also used the riots are part of the plot.
Posted by Anonymous at 1:30 AM