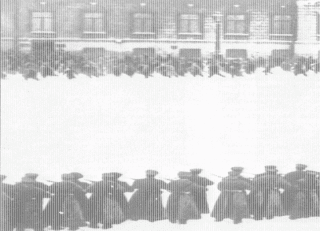 Out of all of the riots on this list, Bloody Sunday is definitely one that many will remember, and sadly the one that turned for the worst. Thousands of Russian citizens were peacefully demonstrating in the streets of Russia to give a petition to Czar Nicolas II. However, the peaceful gathering soon turned deadly when the czar’s secret police force arrived and shot many of the demonstrators, despite the fact that they were doing nothing wrong.

Before the riot that took place on January 22, 1905 in St. Petersburg, various citizens in Russia, mostly those who worked in factories and were considered part of the lower class, were looking for a way to notify the czar of the horrible working conditions that they had to suffer through each day. Lead by Father Gapon, the crowd of people decided that a petition given to the czar would be the best way to get the word directly to the source. Almost 300,000 citizens, many of them workers and their families, walked to the Winter Palace, where they sang hymns, held religious symbols, and even sang songs praising the czar. However, when the crowd started to near the palace, the guards fired warning shots, but they continued on, and this sparked the police to shoot randomly within the crowd, despite the fact that this riot was peaceful. The crowd dispersed and violence erupted killing 1000 people, which only caused a lot of confusion and frantic people.

Sadly, after the shots were fired, people were struck and died. But not only did bullets kill people, the rush of people also caused some to fall and in the end they were trampled to death. The riot basically ended after the shots were fired and the rioters ran away to avoid being killed. Father Gapon, though not killed during the riot, was later assassinated by order of the government. Today, songs, movies, and books have been made to depict Bloody Sunday.
Posted by Anonymous at 1:30 AM