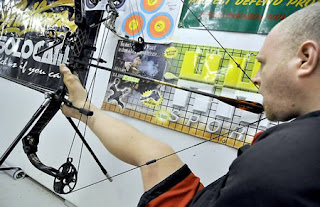 When Mark Stutzman, of Richland, unzipped his bow case and began assembling his compound bow, it drew a lot of attention from some of the other shooters. There is nothing special about Stutzman's bow, case or the tools he uses to put them together with and nothing extra ordinary about his arrows. What was drawing their attention was that Stutzman, 28, was doing all of this - with his feet. Armless from birth and adopted into a family with seven brothers and sisters, Matt has never let his disability slow him down. He does everything with his feet — eat, drive (non-modified vehicles, even stick shifts), write (more legibly than most people), and punch the keys on his cell phone faster than most people with their fingers. He began getting serious about his archery when he was 16.

Shooting in bigger tournaments has meant learning to adjust to people watching him. His normal shooting position is seated in a chair holding the bow with his right foot. He uses a mechanical release attached to a sling around his right shoulder. To pull the trigger, he uses his jaw. When he shoots in tournaments, he doesn't enter as a disabled shooter. He shoots along with everyone else. His average scores are good enough, he said, that he's a contender for the 2012 Olympic team.
Posted by Anonymous at 1:30 AM

Email ThisBlogThis!Share to TwitterShare to FacebookShare to Pinterest
Labels: sports